I have well water.

I love it.  The taste is terrific.

But, the arsenic levels have always been borderline in our regular tests–and so I decided it was time to get it out.

I say borderline as the water is right at the edge of the state mandates.  BUT, those mandates are probably too high, and we know now that very small quantities of chemicals can have a big impact.  Also, the state levels are–and again this is an ongoing problem in this country–a political decision, not a scientific one.  Lower the mandate, and a lot of people would have to filter their water, which means lots of $$$$ and lost votes and charges of “big brother.”

The new system went in yesterday.  Good heavens!!  Look at this!!!

I could have chosen to get out “most” of the arsenic, but decided if I were going to do it, I’d get it all.  Getting it all required two separate filtering systems–one for each kind of arsenic.  (There are two different kinds of arsenic and each must be treated differently.) 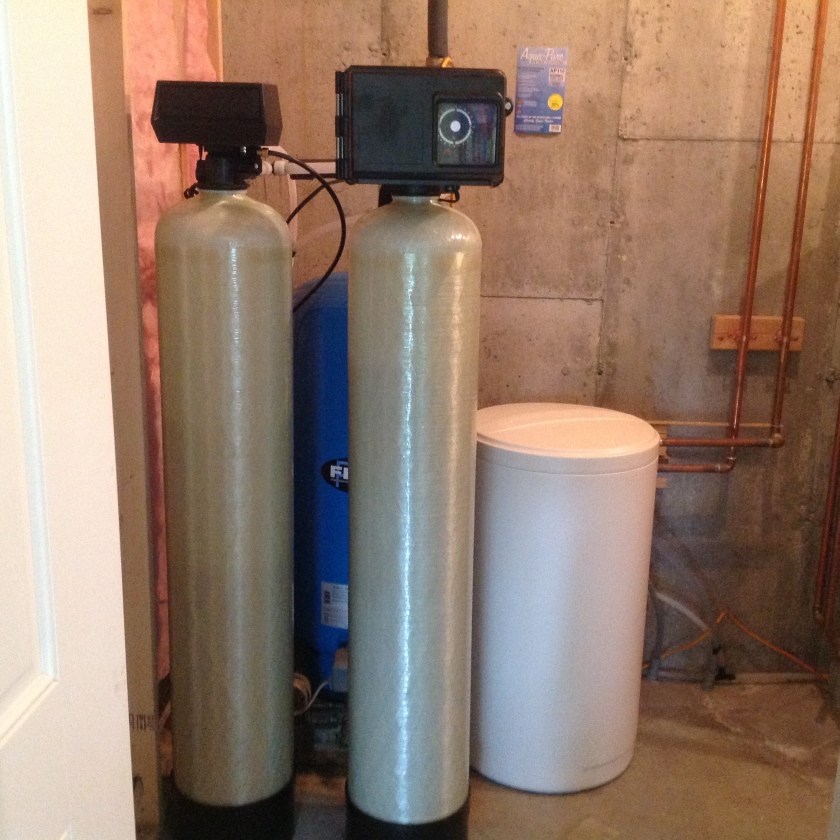 Haskell’s Water Treatment, Inc., were recommended by Mark’s Appliance as “they will do what you need and will not try to sell you what you don’t need.”  That’s a pretty good recommendation from people who would know.

The flower pots I planted are so pretty these days.

Take a look–see also the Annabelle hydrangeas, which are just turning white now.

Annabelles die back totally into the dirt each winter, and it always amazes me that they come back from seemingly nothing to put on such a show.

Here’s the pot that sits on the wall that is, now, rotten and will be replaced in the next few weeks–with materials that will take our winter better. 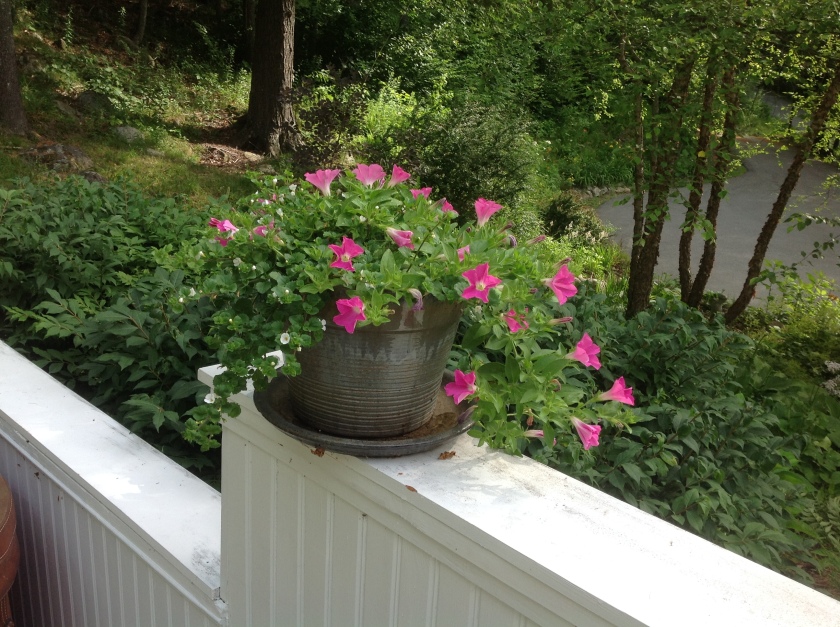 On the front porch, the Lantana in the pot on the right is gearing up.  I really like the pink-tinged ivy in the big pot too.  The raspberries in the background are just starting to produce fruit. 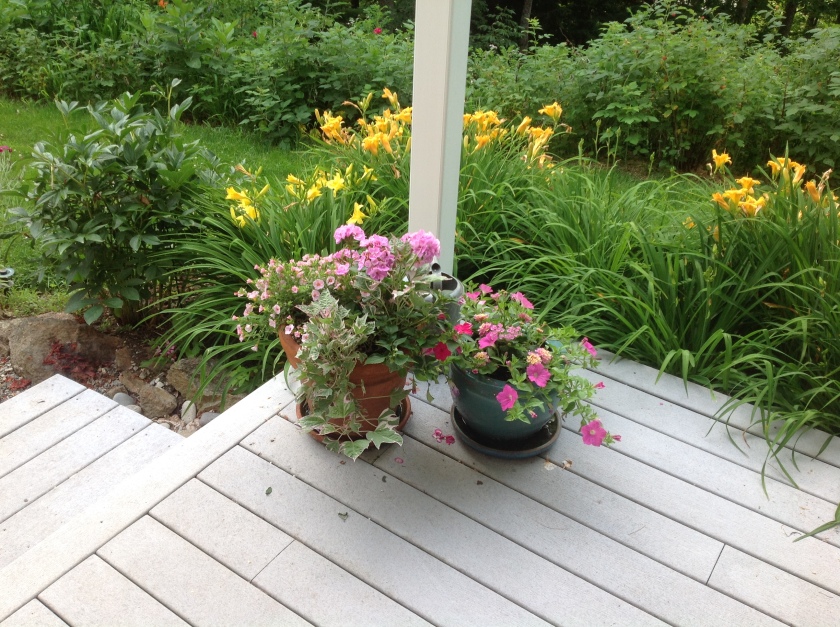 Here’s a view down the front porch.  It’s so pretty.

The day lilies are awesome this year.  (Thank you Tom Jackson Landscape.)

Hope’s Edge, my CSA, is in full swing.  Last week was the first strawberry week.  Here’s Farmer Tom laughing as I sample one of the strawberries I picked. 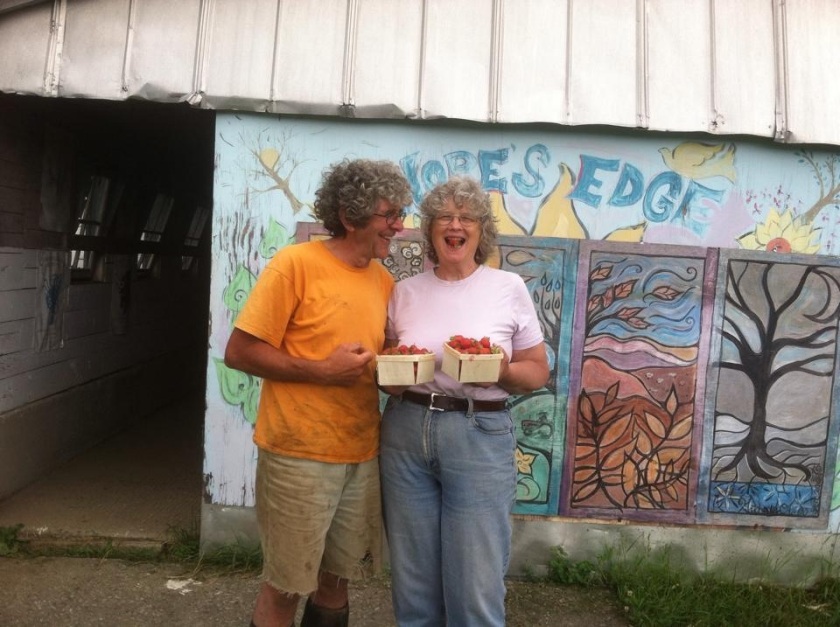 There were enough strawberries left this week to get one more quart.  These are tiny and so incredibly sweet.  The smell and taste like some exotic perfume.

When I think that so few people any more will get to taste strawberries like these, I want to cry.  You have to know an organic farmer or grow your own with all the right amendments in place. 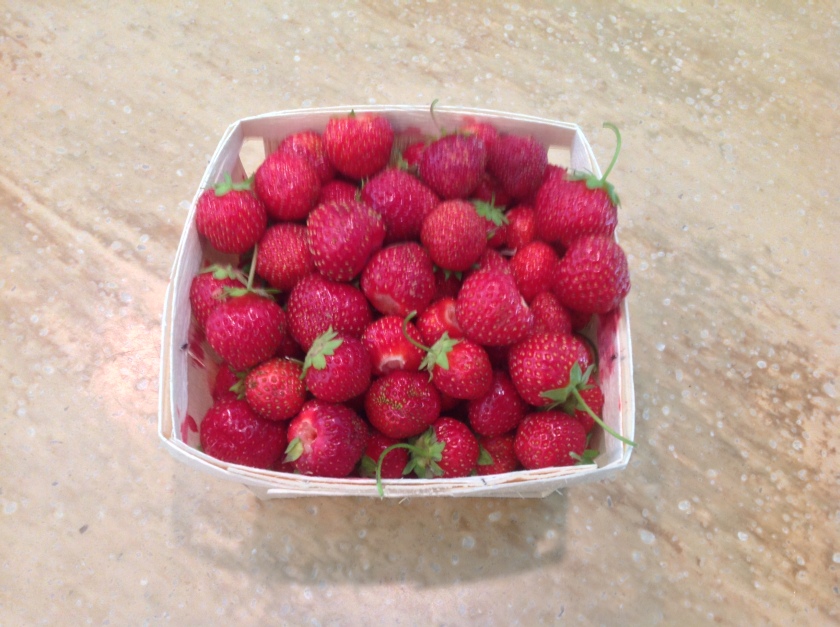 My own home patch of strawberries had a banner year.  I think I picked the last of my berries yesterday.  I have at least six half-gallon bags frozen now.

The garlic scapes are lush this year.  I made a soup with some of the heads and chopped and froze the rest to add savoryness to soups and stews.

I just finished the audio book MERLE’S DOOR, Ted Kerasote, and really enjoyed it.  If you are a dog lover or like to hear tales of living in places like Wyoming, with all its wilderness and grandeur, this is a book for you.

I just started an audio book called IN THE MOON OF RED PONIES, James Lee Burke.   Don’t ask me why.  It was available on the library audio books list.  The beginning is interesting…

And, there’s Michael Pollen’s COOKED in the mornings.

Life is good these days…

No Time To Cook

I’m so enjoying this summer.

In the mornings, I’m getting up early, feeding and releasing the chickens from their coop, feeding the dogs, making a big cup of tea, and sitting on my back deck with a book for at least an hour before really starting my day.

At night, before bed, I read fiction.  In these early morning hours, I am reading mostly nonfiction.  My current book is Michael Pollen’s Cooked, which I’m really enjoying in all kinds of ways.  I love the way Pollen THINKS about his subjects as it’s thinking that is informed by a lot of research of all kinds–to include spending time cooking.

I’ve waded through the “fire” section–which is all about roasting meat over coals and all the implications of this very male form of cooking.  Think pit barbecue.

I’ve almost finished “water”–which involves stewing, souping, braising–or cooking in a pot with aromatics and liquids.  This “water” section also takes on the fact that we say we have no TIME to cook any more.  If buying food saves us thirty minutes a day, what are we doing with that time?

But wait!  Does buying food really save us thirty minutes?  Does going to a restaurant?

Americans work longer than any other industrial nation, writes Pollen.  Since 1967, we’ve added 167 hours, or the equivalent of a month’s full-time labor, to our work year.  With two parents involved, the amount is more like 400 hours.  Why?

This probably owes to the fact that, historically, the priority of the American labor movement has been to fight for money, whereas the European labor movement has fought harder for time–a shorter workweek, longer vacations.  Not surprisingly, in those countries where people still take home cooking seriously, as they do in much of Europe, they also have more time to devote to it (183).

And these people who cook are thinner, Pollen points out in a number of places in the book:  “the more time a nation devotes to food preparation at home, the lower its rate obesity” (191, 192).

Folks, WE HAVE TIME TO COOK good food.  It’s always already about the choices we are making, isn’t it?

We’re also doing a lot of what is called “secondary eating”–or eating while doing something else:  watching tv, driving, getting dressed, and so on.  We now spend 78 minutes a day in secondary eating and drinking (190).

Pollen and his family try an experiment:  Microwave Night.

He and his son go to the grocery store to pick out a dish for each person–three dishes (the third for his wife) and a dessert.  The total cost was $27.  (Pollen notes that he could have bought grass fed beef and veggies for a stew that would feed the family for two nights for the same amount of money.)  Their first obstacle is to buy food that has recognizable ingredients and isn’t full of hydrolyzed vegetable protein (soy).  Their second is realizing that some of their foods have packages that announce that they need to be cooked in the oven for best results and will take up to 45 minutes.

To make a longer story short, it takes an hour to microwave all the food–and at no time can they sit down together at the table as someone is always checking on the dishes in the microwave or their food isn’t ready yet, or is, but is getting cold.  Dinner time was a disaster in terms of family time.  The food also all tasted “remarkably similar”–no matter how exotically different–and much like what airline food used to taste like.

The next night, they ate a stew, visited over the table, and were relaxed and energized.  The stew had been in the refrigerator since Sunday–when it had been cooked for the week–a practice Pollen has worked into his schedule.

By the time the sweet smells of allspice, juniper, and clove began to fill the house, Isaac and Judith had gravitated to the kitchen; I never had to call them to dinner.  I brought the pot out to the table, and began serving everyone from it (200).

For the first time all day, it felt like we were all on the same page, and though it would be overstating things to credit that feeling entirely to the delicious braise, it would also be wrong to think that eating the same thing from the same pot, this weeknight communion of the casserole, had nothing to do with it, either (201)

So, I’m looking forward to the Air and Earth sections of Cooked.

And I remain certain that I will continue to “occupy my kitchen”–as I have all of my adult life.