A C Slater is in The House

I had been thinking of adopting again as Penny (No No Penny) is now 15 years old.  She’s doing great for the most part, but…

My kids thought it was time.  And, Penny could help train a new dog.

I was looking for another rescue rat terrier female, between 2 and 6 years of age.  NO PUPPIES!

Then I saw this online picture from Rock City Rescue, Arkansas, and fell in love. 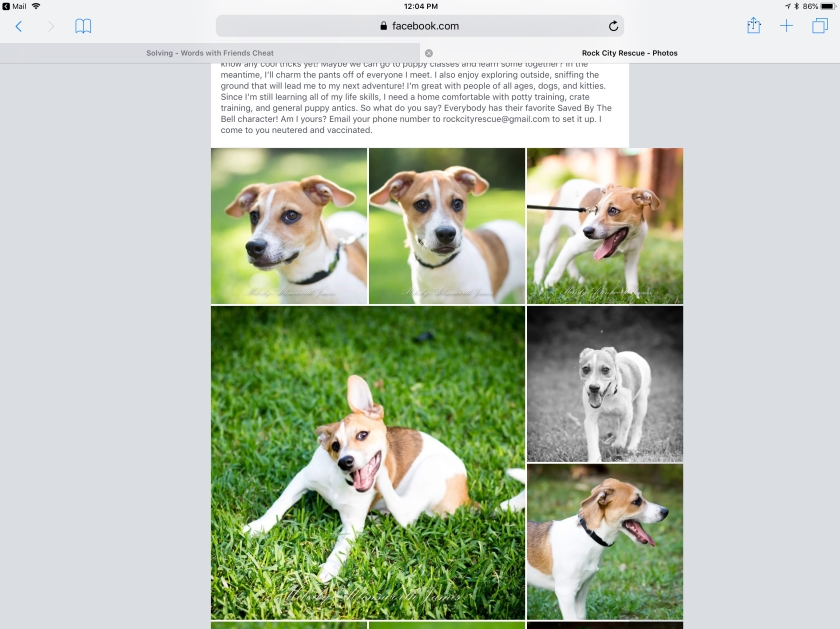 AC Slater was a 5 1/2 months old male.  Mommy was a 40-pound “hound,” and daddy was a 30-pound terrier mix, with some Jack and some rat involved.  I needed a dog big enough to be safe on my property, and most rat terriers today have been bred to be smaller–unlike my No No Penny, who is a standard size and weighs about 25 pounds.  I am wondering if Slater actually has fox hound genes.  He doesn’t really act like a Beagle mix.  But who knows…  And I don’t care really.  The upper middle picture reminded me strongly of Miss Reynolds Georgia–and friend Gina Caceci saw that too the other day when I sent her the picture.

AC Slater came from an unintended litter which was turned over to Casey Carter.  All AC’s siblings have been adopted now.  They were all named after characters on the old tv show, “Saved By The Bell.”  AC Slater is a real musician who was also a character on the show.  I like the name and will keep it.

Casey Carter of Rock City Rescue down in Arkansas worked with me to make the adoption happen.  These people are so amazing.  Their dedication to this cause is awesome.  When Casey decided I could have AC Slater, she put me in touch with his foster mother, who has had Slater since he was about 4 weeks old.  Ashlyn was and is an amazing foster mother.  Slater clearly has been loved and nurtured.  He is so sweet and gentle, and he’s good with people and other dogs.  Ashlyn shared with me all the information I needed to make the decision to adopt AC Slater.  And she sent him “fully loaded”:  collar, retractable leash, food he was on, bed, blanket, favorite toys.  I was moved to tears when I saw her generosity.  It was already clear she loved him from our conversations, but now I saw how much she wanted him to be happy in a good home with another person who also loved him.

Casey, pictured on the left below, rented a van and with a friend, left Arkansas on a Friday morning and dropped off dogs and cats all along the way to people who were adopting them.  That’s Casey’s friend in the white shirt on the right.  The couple in between were adopting a cat–they live in Portland, Maine.  I drove to Kittery, Maine, down on our southern border, and met Casey about 7:30 Saturday night.  AC Slater and the cat were the last two animals in the van. 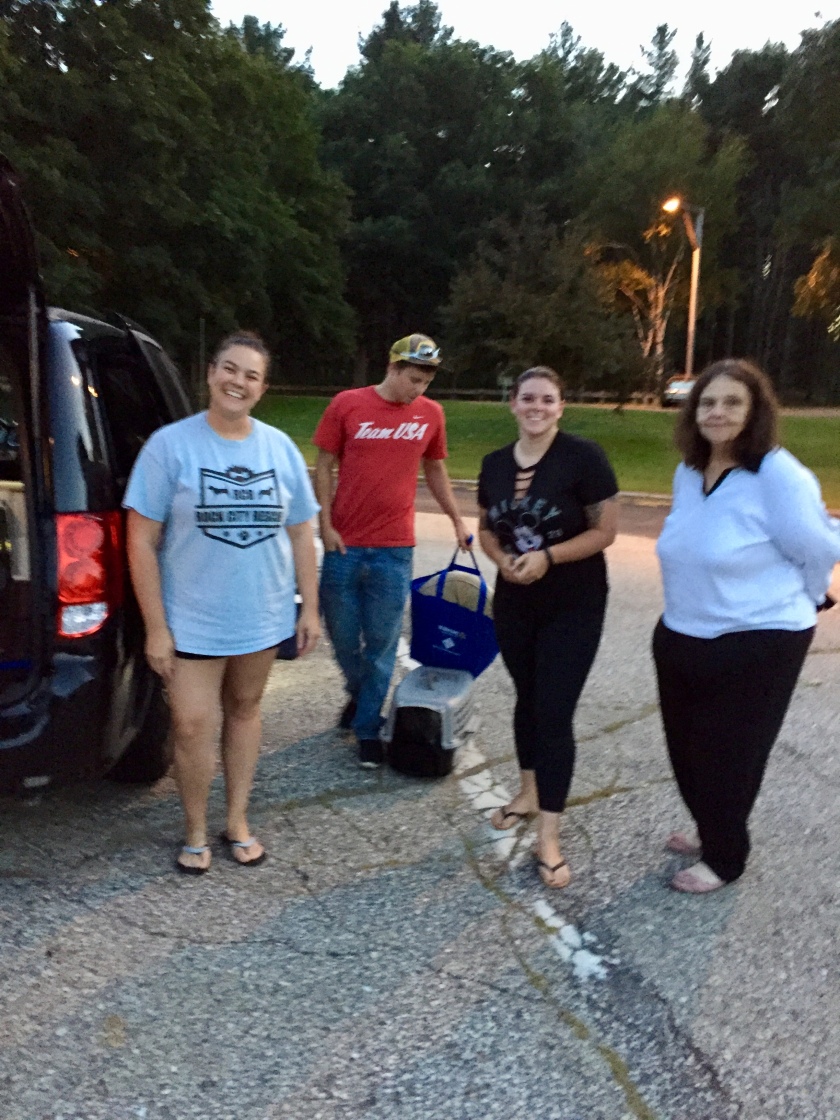 Here’s my first look at this adorable creature. 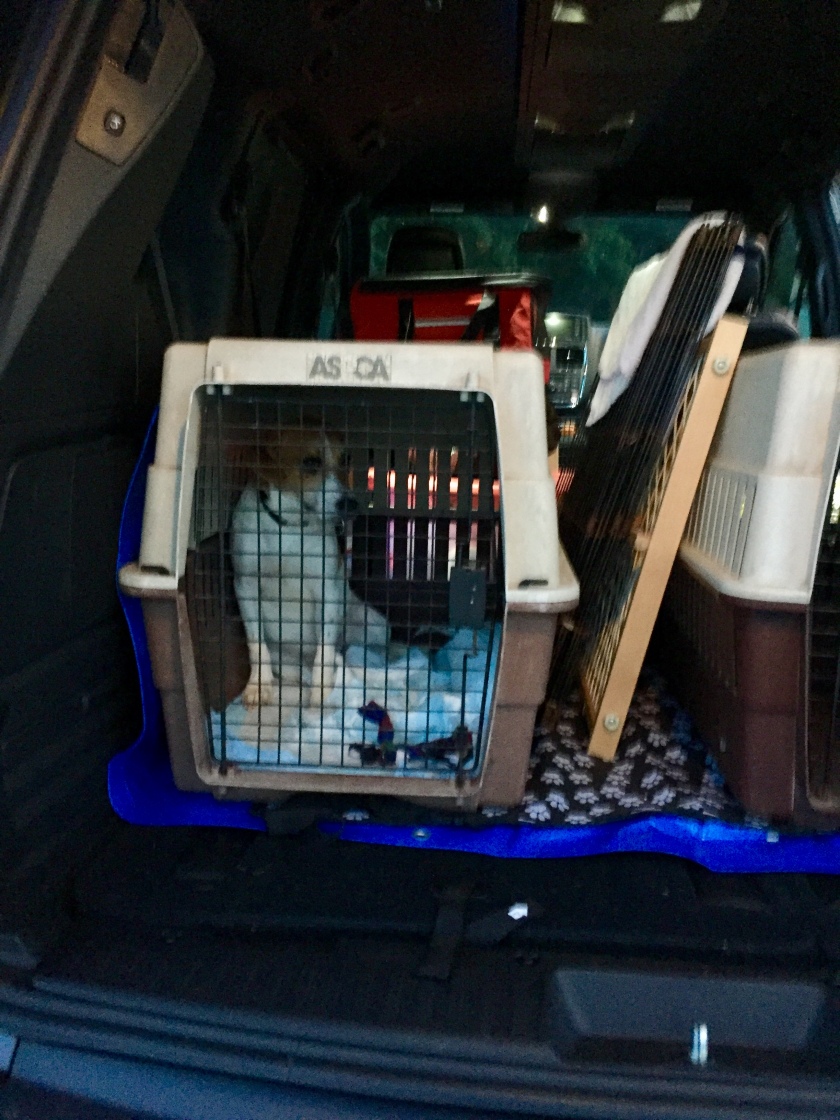 And Casey took this picture of us when he let me pick him up. 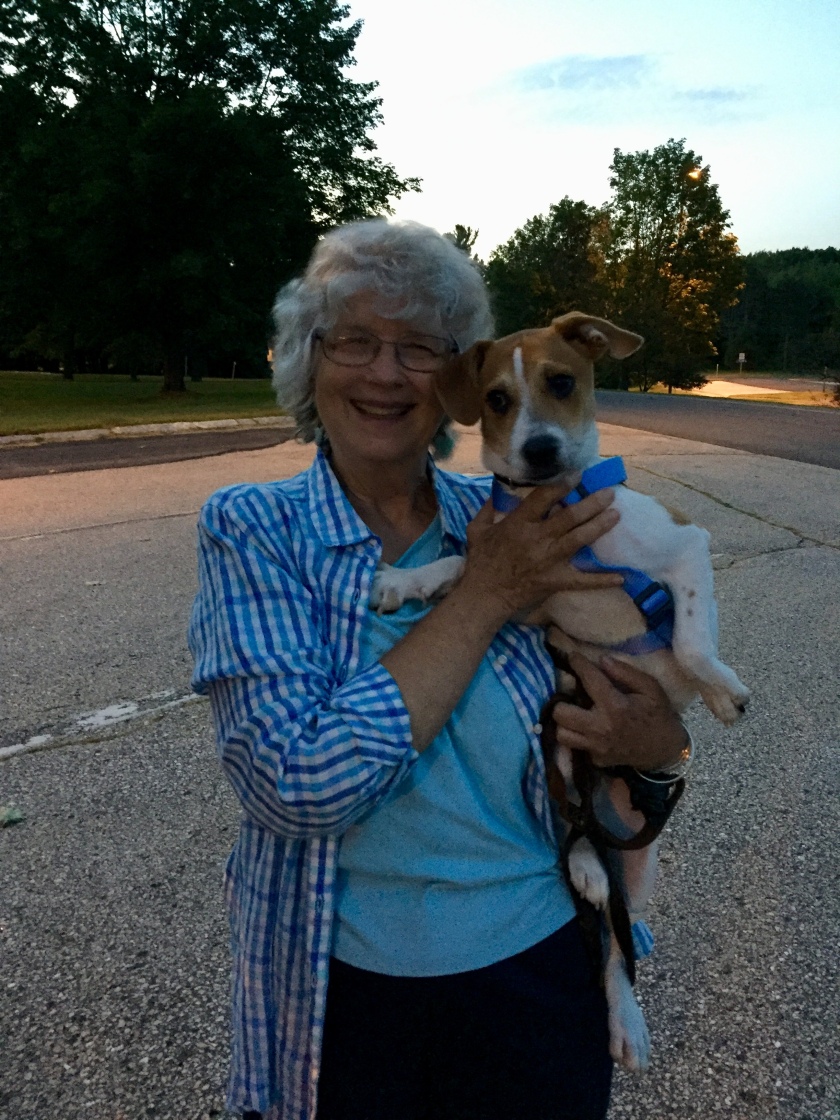 I had rented a “pet friendly” room nearby, so I took him there, and we began to bond.  You can see his bed and his blanket and toy, sent by Ashlyn.

The next morning, AC Slater was my co-pilot for the 3-hour journey home.  You can’t see it well, but he does have a safety chain attached to the seat belt.  By putting him near me, I could talk to him and pet him all along the way.  And we did stop often in case he needed to go potty or just stretch his legs a bit.

He LOVED the basket of dog toys:

And Penny let him into her bed at some point in the next few days:

And so it goes.

My life has been incredibly busy as I walk this high-energy puppy, which Penny loves, and take him to our local dog park where he can really run with other dogs.  Then there is the potty training, the leash training, and, lately, the gentle introduction of the radio fence collar so he can have full run of my property.

Here’s a picture taken this morning of Slater outside of my house–with his radio collar on:

My thanks to my family for encouraging me to take this risk, to Casey Carter for the work she does, to Ashlyn who gave AC such a good start, to friends who are also helping me when I need help.

4 thoughts on “Turkey Tracks: A C Slater is In The House”