Here’s a picture of a block close-up: 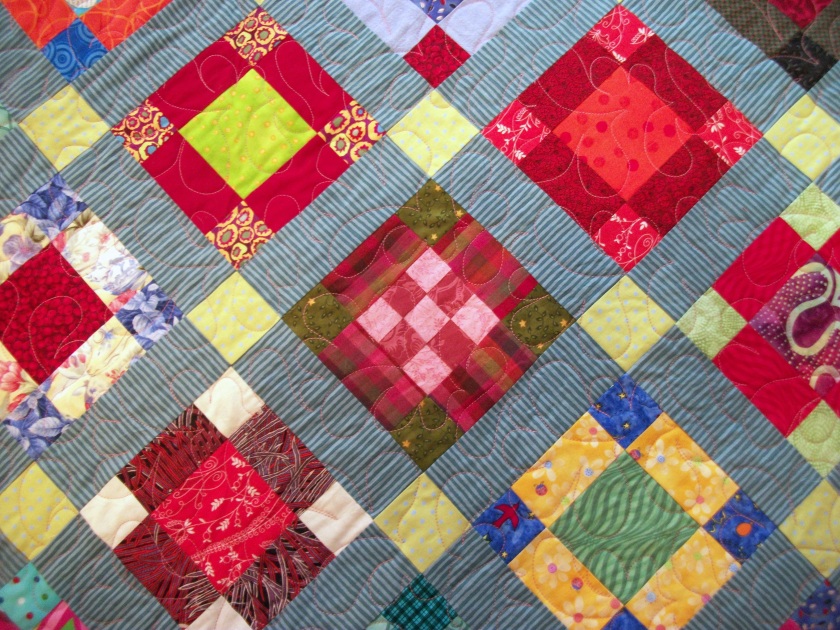 This block pattern is a very old one–and I have been unable to put a name to it.  It’s just always–there.  If anyone has a name for it, please let me know.

What’s different here is that I surrounded the block with a stripe and used a unifying corner stone.  Then I set the blocks on point.  The idea for using stripes, a unifying corner stone, and setting the blocks on point came from “Quilt Magazine,” Susan McDermott, and her remake of an older traditional quilt using these tatics.  The article was called “Old World Comfort.”  When I xeroxed the article so I could “play the magazine forward,” there were no dates on the pages.  My memory is that it appeared in the late fall/winter of 2011.  The magazine’s web site does not have any listings of what has been published when…so I was unable to find McDermott’s quilt reproduction again.

For over ten years I have been cutting leftover fabric that’s too small to fold into my stash into useable pieces.  The most versitile show up in this block:  3 1/2-inch squares, 2 by 3 1/2- inch rectangles, and 2-inch squares.  The 3 1/2-inch 9-patch you see in the above pic is from a quilt given to my niece, Kerry Enright, some years ago.  I had a few of those 9 patches leftover and just threw them into the bag of 3 1/2-inch squares.  And, for me, it’s fun to see all the pieces of quilts I have made over the years.  I can feel their good energy vibrating in this happy quilt.

What’s cool about this quilt, though, is the backing: 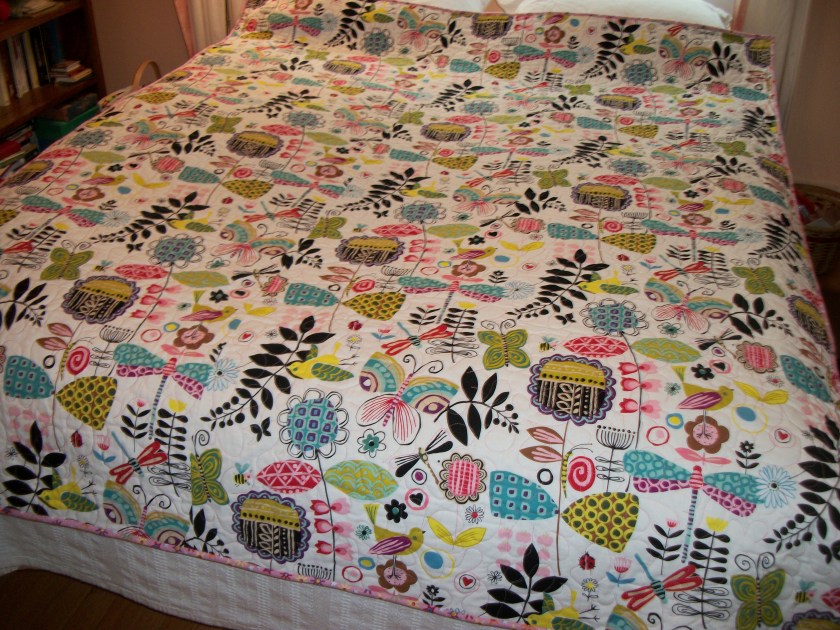 I absolutely love this fabric!  It’s called “June Bug.”  You may see some of it turn up in quilt blocks down the road, too…  I especially love the dragonfly which is my artist symbol.  I often use the term “Lovey Dragonfly” to sign a piece of artwork.

The name comes from the binding fabri , which has a round stamp scattered across it that says “Barnum and Bailey Circus:  The Greatest Show on Earth.”  I had been going to call the quilt “Nature Sings” since there is a lot of “nature” in the front blocks as well.  But, the Circus stamp chinched the name for me.

I quilted using an “antique rose” thread, which did not detract from the back and which “dumbed down” the red border on the front, and I used an all-over feather pattern pantograph.  (I really love pantographs!)

This quilt went with love and affection to my great niece and fellow artist, Fiona Whittle.