About six months or more ago, I became fascinated with the Lucy Boston quilt block–made with paper piecing.   I saw these blocks at Alewives quilting store in Damariscotta Mills, Maine.  Rhea Butler and some of her staff were playing around with these blocks.  And theirs look much more like Lucy Boston’s eclectic fabric choices–see below.

I wound up doing four blocks–which turned out being larger than I had thought once surrounded with the outlying neutral pieces.  This quilt finishes at 33 inches square.

This quilt also did not turn out to be square–even with the paper piecing–due to the bias edges on the pieces needed to make a straight edge.

Here’s a close-up of the blocks–which are very fun to do:

And, closer still of the joining blocks–which I kept very plain:

Lucy Boston herself made a coverlet–with elaborately fussy cut pieces of fabric–and the amazing coverlet is captured by Linda Franz in her book LUCY BOSTON:  PATCHWORK OF THE CROSSES.  Lucy Boston lived in England and made these blocks in the 1950s.

Here are more pics of this amazing quilt–from the book: 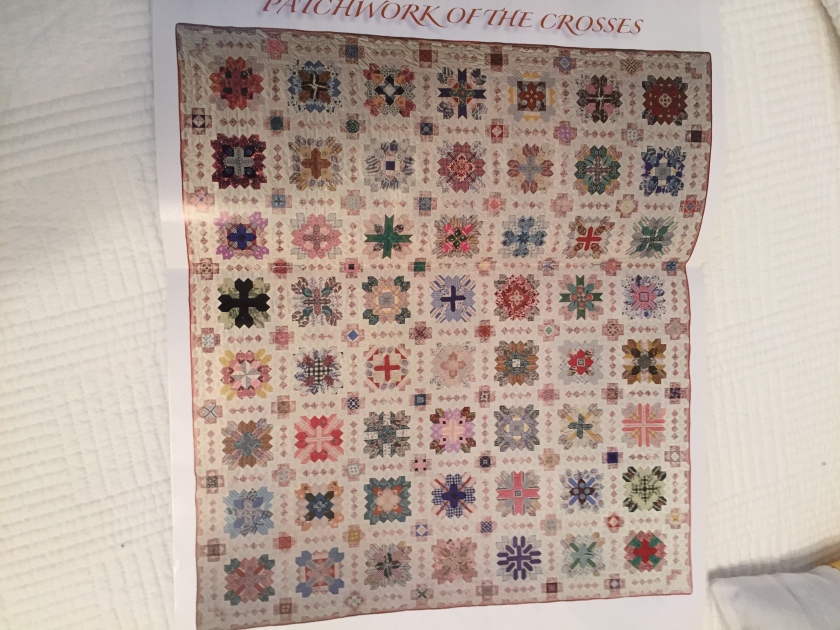 And a close-up of one block to give you some idea of the complexity Lucy Boston manages–look also at her cornerstones around each block:

So, I learned a few things about this kind of project.  Cut the edge paper pieces on a STRAIGHT EDGE.  And stay stitch them with the sewing machine.

I had a terrible time trying to decide how to quilt this project–and opted for some rudimentary quilting that used pearl cotton in straight lines and handquilting that just outlined the blocks.  But, handquilting was really, really hard with the thickness of the seams.  Since I had done all this handwork, I was not especially wanting to use the machine to quilt.  BUT, I think I would now if doing this kind of project again.  I don’t know, maybe Lucy Boston had the right idea with just making a coverlet–where she stitched around the edges, right sides facing, and turned the coverlet and…ironed flat???   I didn’t want to tie this quilt as I thought that would look messy.  But, maybe just in the center of the cornerstones???  And with a very neutral pearl cotton???

Linda Franz does have alternative sewing methods–including stitching the blocks all on a domestic machine.

And Leah Day has a video on her web site showing an alternative way to paper piece that is different than whip stitching.  I linked to this video in an earlier post on paper piecing.  Search for Leah Day, and you will find it.  Or just go to Day’s site and search for hexies and sewing…

These blocks are really fun to make–and I find myself wondering how they would look butted up to each other without the surrounding neutral layers.

Meanwhile, this quilt wanted to be outside my quilt room:

And daughter-in-law Tami’s quilt that used to occupy this spot has been moved to a place of honor in the main room on this floor.

I Broke Down and Bought One

A crock pot, that is…

With a crockery liner… 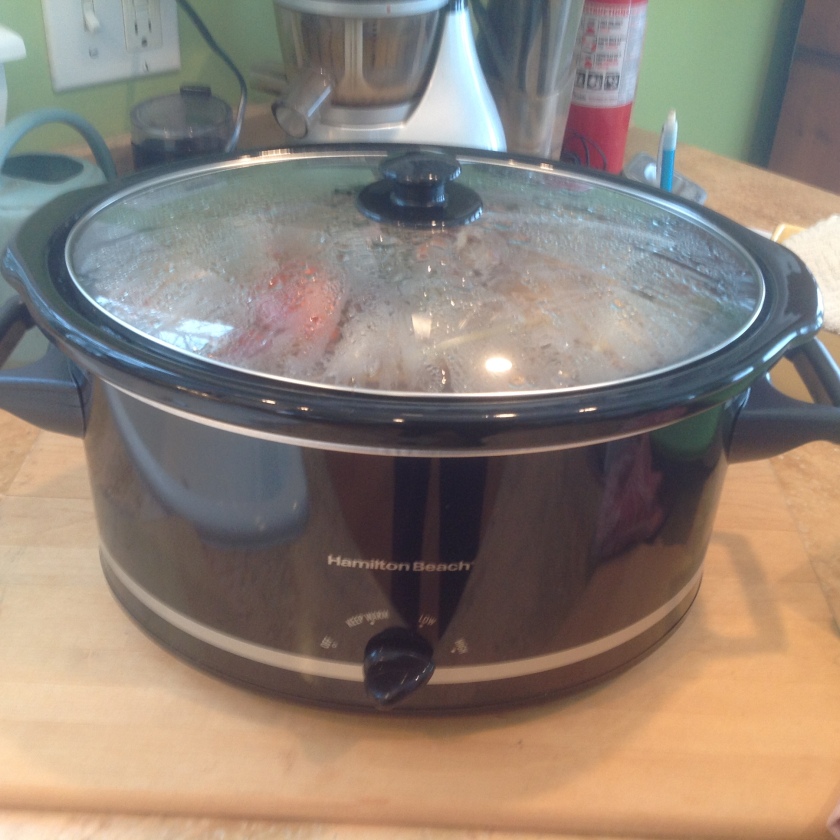 Which would have meant…

Now, I keep a bone broth soup in the refrigerator almost all the time, especially in winter.

It takes a good 24 hours to leach all the minerals out of the bones, so it’s actually not all that hard–especially if there are multiple things going on–to…forget it…

So, I’ll risk the lead and save the house.

You can see this big pot (it holds EIGHT QUARTS) is perking right along with a bone broth.  This one has a chicken carcass and all the roasted veggies from the chicken, a lamb leg bone, and the lamb rib bones from the lamb I got this year.

Bone broths are incredibly medicinal, especially in the winter.