Their colors take your breath away. 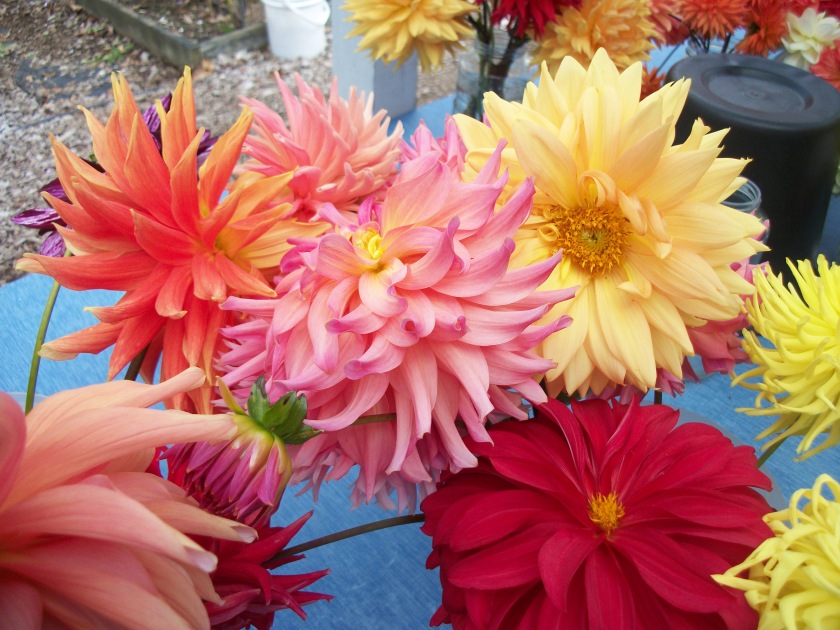 And at Endless Flower Farm in Camden, Maine (on East Fork Road) there are thousands and thousands of these dahlia’s–in every color imaginable.

This farm is within walking distance of my house–and I took Susan there on our way home from our trip up north.

Every fall, each dahlia tuber has to be dug up and stored and each spring each one has to be replanted.  Keeping track of all these tubers–and knowing where to plant them next year–is mindboggling.

Here’s Sue, who was amazed. 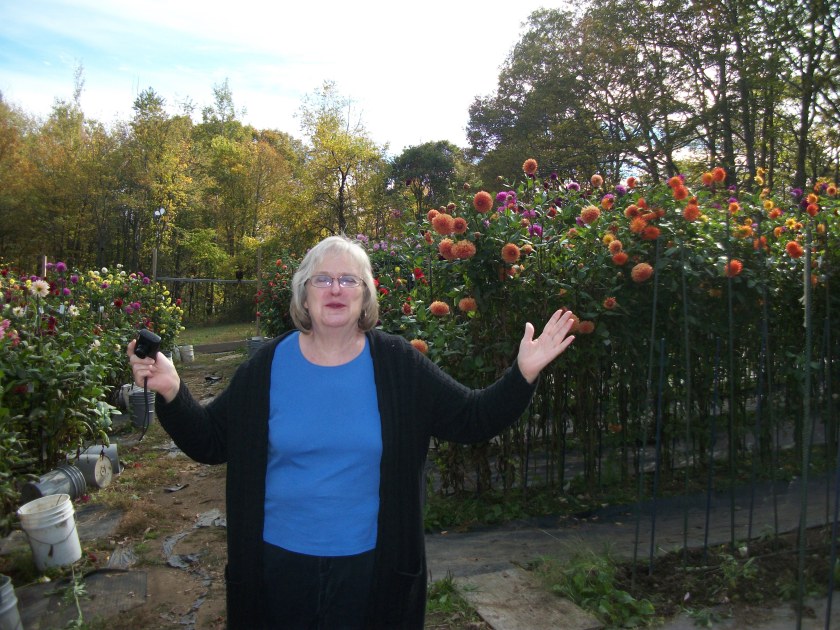 Here’s a view of one of the gardens: 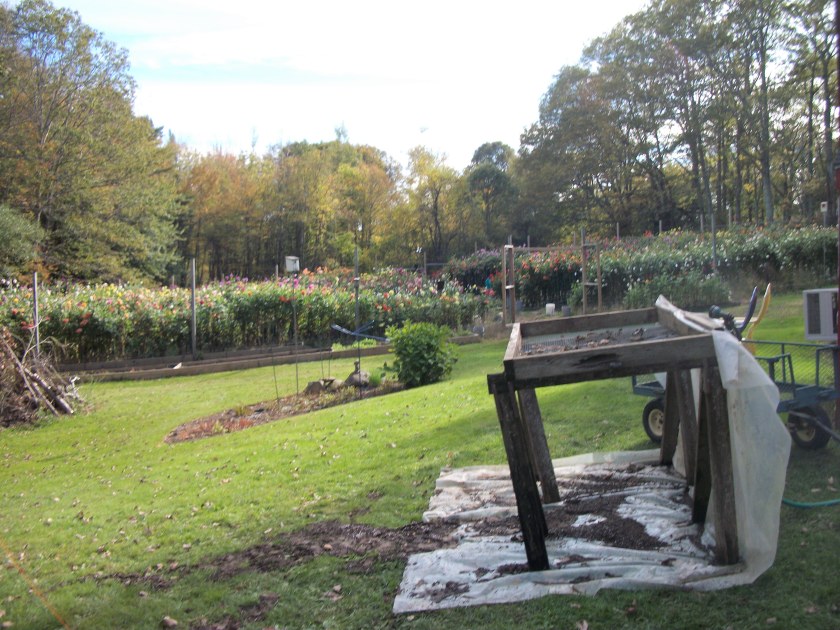 And here’s Susan in that garden: 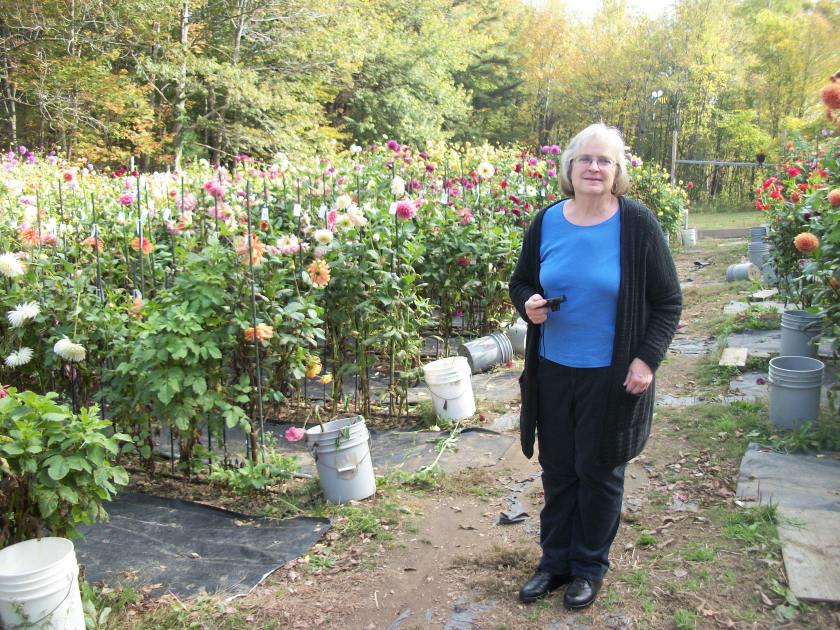 Many of these dahlias are way taller than a person.  All have lavish, glorious blooms.

We also liked this building design on the outside of the house!

Gallery On The Lake, Greenville, Maine

One of the stores in Greenville, Maine, is Gallery On The Lake, run by Becky Morse.

Susan and I both bought multiple items for gifts in the store.

I bought my granddaughter who will be three in late November a special present.  I’ll put up a pic of that after she has the gift.

And, I bought several handbags made by Anne H. Doody.

Now, I don’t buy handbags.  I make them myself.

But, Anne’s workmanship was so excellent and her fabric combinations so terrific that I bought two bags–both destined as gifts.  I am telling myself that I am supporting a fellow fiber artist and saving myself some time to work on the many quilts I have planned for the winter.

Here’s a bag of Anne’s I bought: 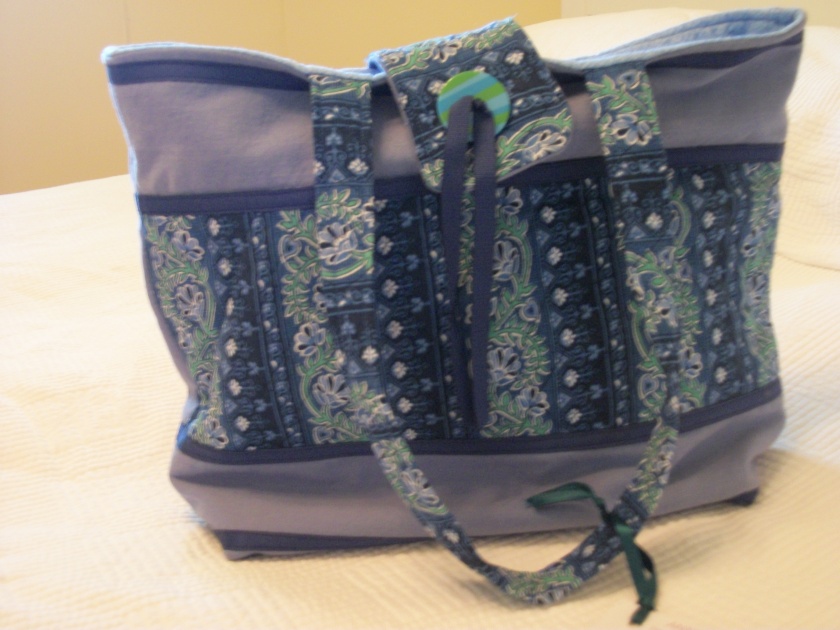 I love the jean pocket.  And here’s the inside which has a zipper pocket and other pockets too: 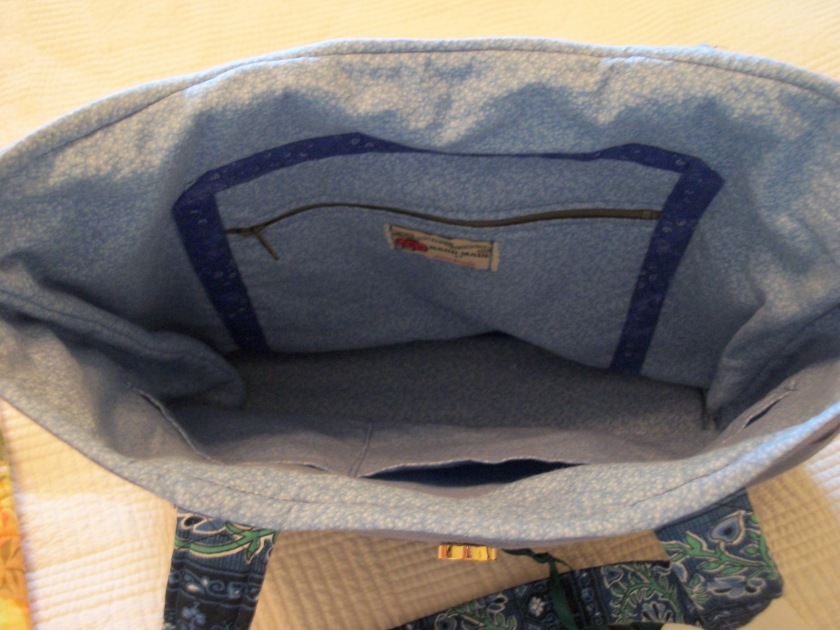 I also bought a diaper bag–and sure enough, I just heard of a new family baby coming in May.   (Not one of my sons.) 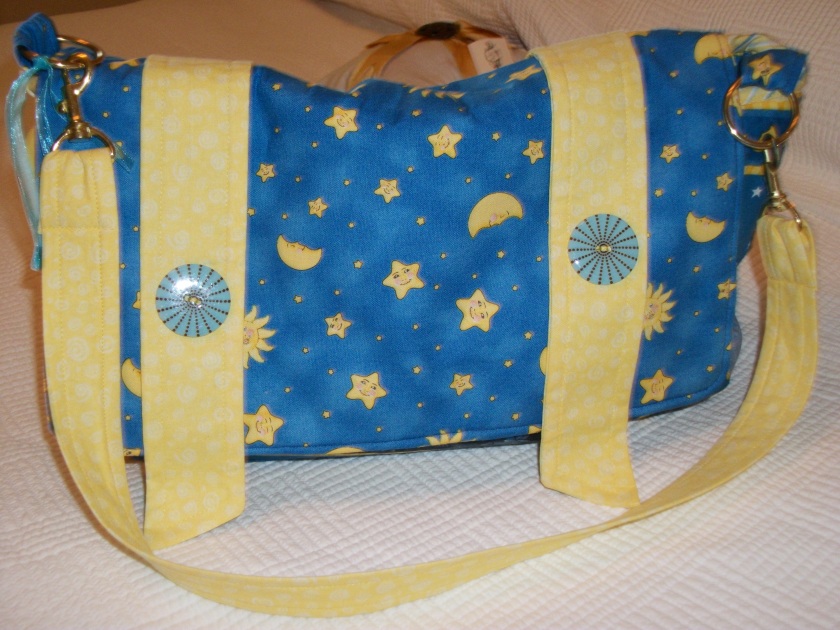 Here’s the side view of a bottle pocket: 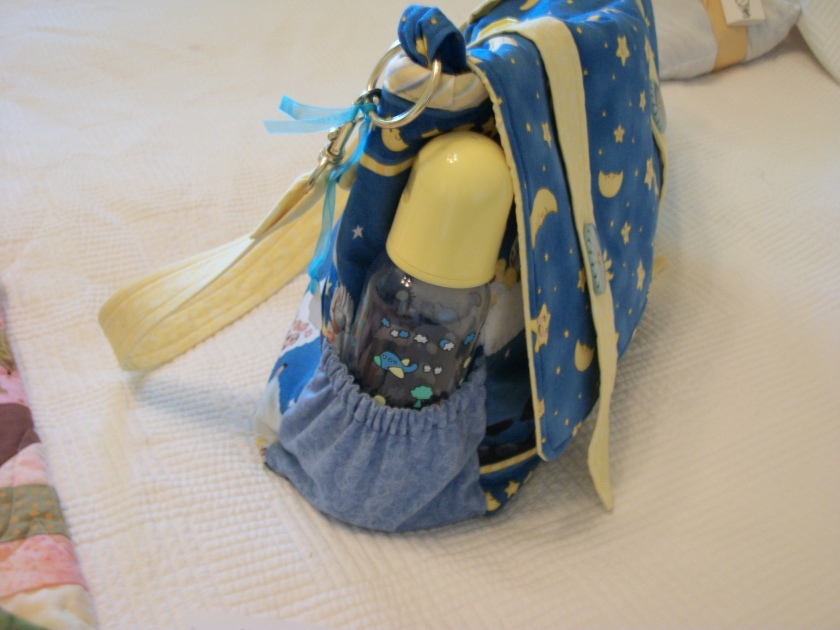 And there are lots of pockets on the inside: 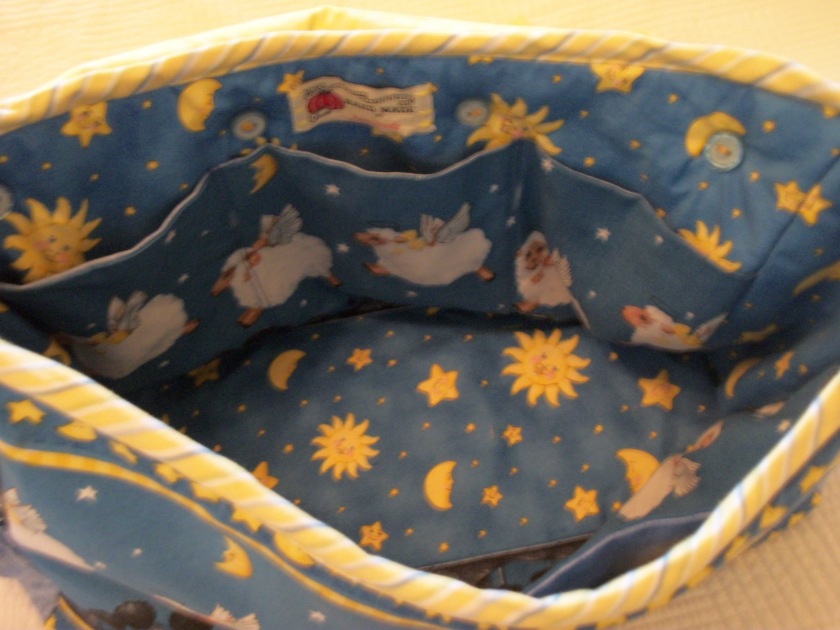 ANNIEUPNORTH takes custom orders, and if you want something special for someone special, you would not go wrong with her work.

And Becky Morse of Gallery On The Lake can be reached at bgmorse@myfairpoint.net

I found a “fall foliage” suggested route on the Downeast Magazine web site that took us up north to the famed Moosehead Lake area.  We decided we would stay a night in Greenville, which sits at one tip of the lake.  Our destination–halfway around the suggested route–would be the Captain Sawyer Inn.

So, we set off on Wednesday morning–the car packed with warm clothes in case we needed them and a cooler filled with food we could both eat.  It was a beautiful fall day, and the tree colors up north were said to be at their “peak” intensity.  (Our leaves here on the coast were just starting to turn in earnest.)

North of Waterville, which is about an hour from Camden, we started up a scenic highway, 201.  And, it was very pretty.  We stopped several times to take pictures as the Kennebec (or some of its tributaries) ran alongside the road all the way up to Jackman.  you can see that these trees are not at full peak yet, but they were starting to be really pretty. 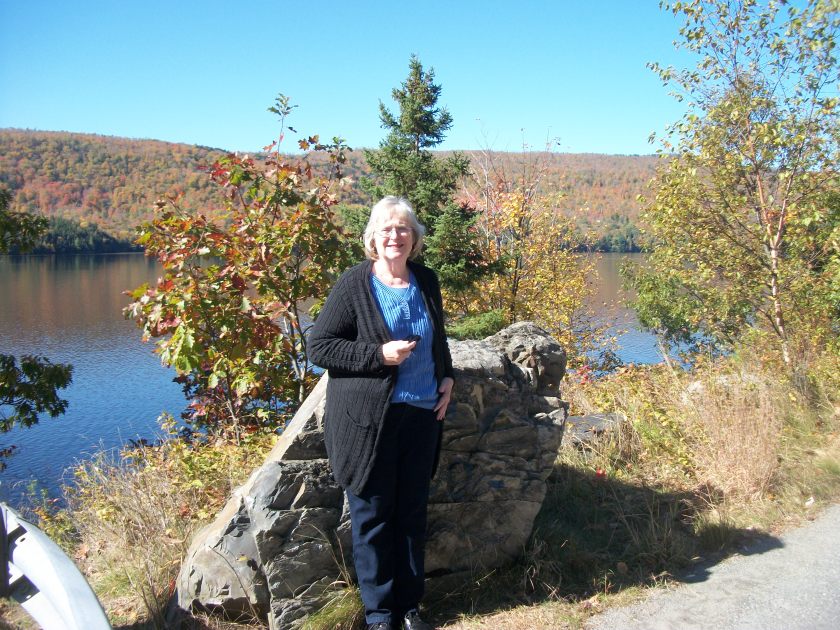 Here’s where we stopped for our picnic.  This stretch of the river was damed years ago down in Skowhegan for electricity.  In the process, a whole village was flooded and people had to relocated in the name of progress.  Susan could not get over how much water there is in Maine–rivers, creeks, lakes, ponds, mudpuddles.  Maine was gouged out by the retreating glaciers, which made all of our beautiful water features. 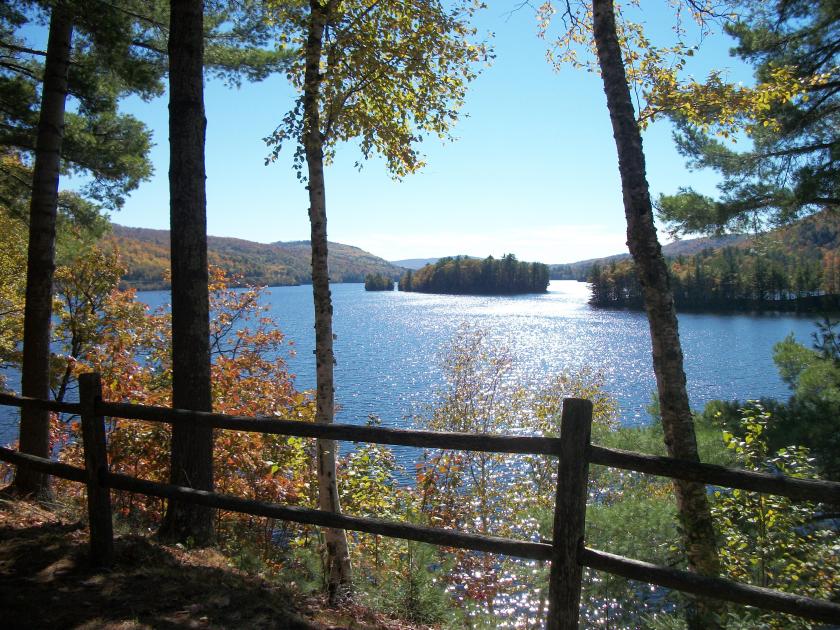 There were a half-dozen picnic tables scattered across this pretty little park. 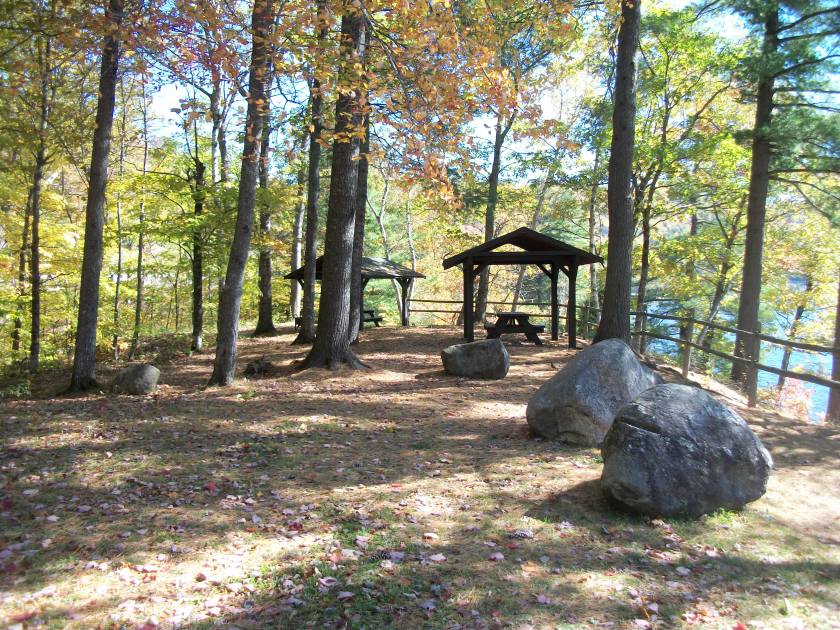 Up near  Jackman, we stopped at this amazing view.  That’s Canada starting in those mountains.  And the start of the Appalachian Trail is just a few miles north of Greenville, at Mount Katahdin. 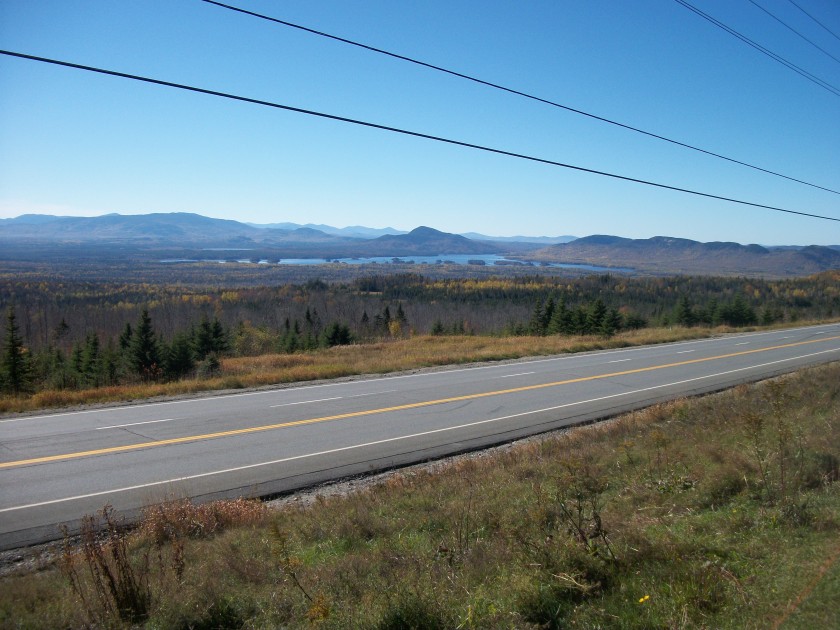 Sadly, Susan, who takes far better pictures than I do, lost all of her pictures in a technical glitch.  Among them was a great picture of the sunset over Moosehead Lake.  That means another trip up there to take the picture again!!!

At Jackman we turned north and drove along the lake to Greenville.  The Inn was delightful, and the town had some shops selling lots of products made by local artists.  I WISH NOW that I had bought one of the wooden picture pieces–where the artist fitted together a north country scene out of painted wooden pieces.  So many of these products were so very different from anything else I’ve seen in Maine.

The leaves were gone up here though–blown off by a storm that came through two days before we left for our drive.  And our trees, which are very late this year, are only now, on October 24th,  in all their magnificent full color.

We stopped in Belfast for another picnic on our way home.  Belfast is just above Camden on the coast.  Belfast and Searsport, the next town north on the coast, were major sites for ship captains to sail into when transport was best served by boats.  Searsport has dozens of huge sea captain homes as a legacy of that time.

Belfast has done a lot of work on their harbor park in recent years.  It’s quite lovely and very inviting.  As you see, we had another gorgeous day. 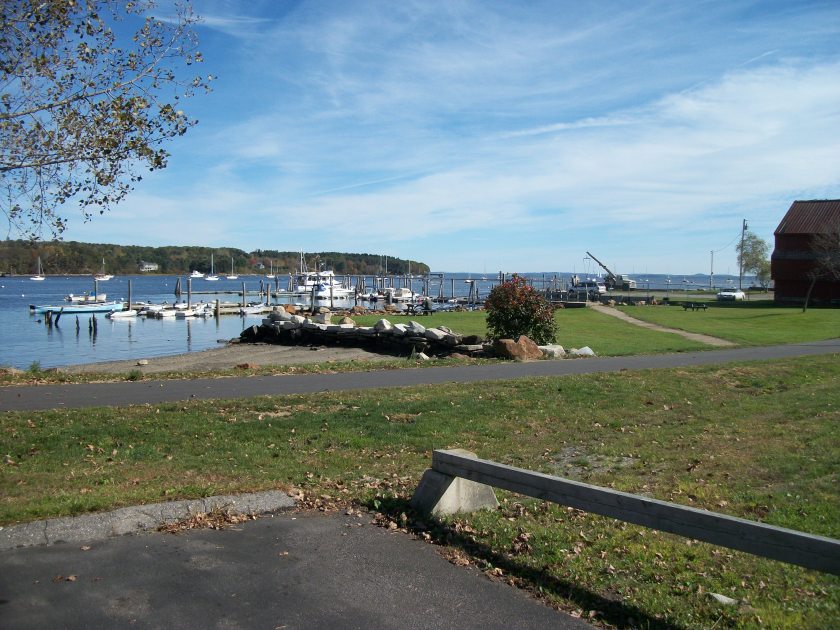 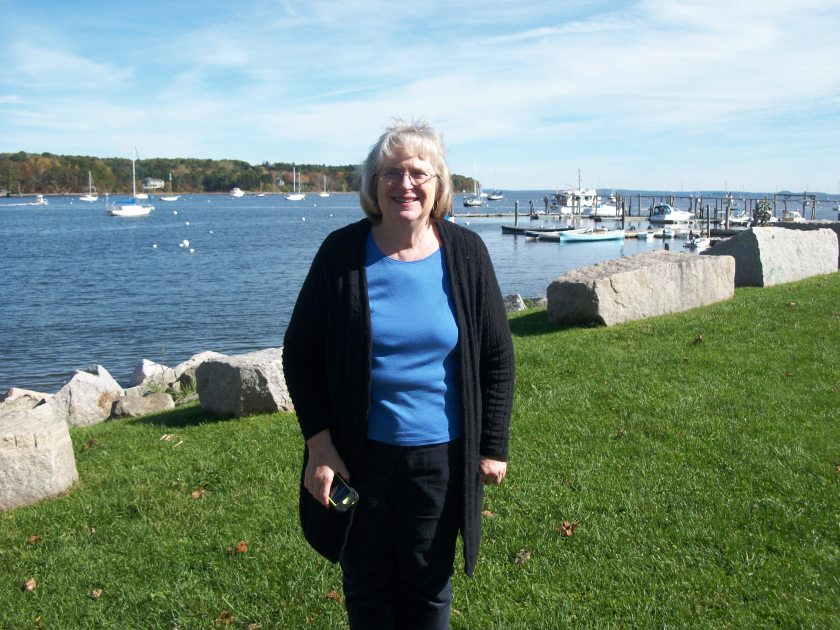 On the way home I took Susan up to Point Lookout, where the woods and the view are lovely.  (I will be eating Thanksgiving dinner up here.)  Susan took this picture with my camera. 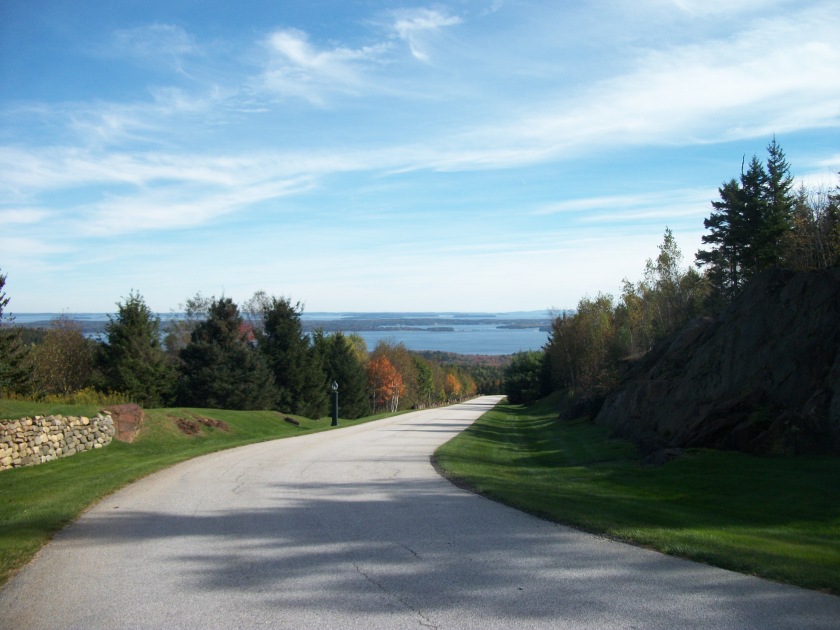 It was a good trip.  One I will make again I hope.

We ate the rest of our cooler food, which was delicious, for dinner.

I almost missed the elderberry harvest again this year.

you really have to keep a sharp eye on the berries because they are near ripe one day and gone (birds) the next.

So, back in September some time, I got what remained on the two bushes I have.  One is almost a tree, and when we first came, I kept cutting it down as it’s growing in the rock wall below the house.  (Harvesting it is…dicey.)  The other is a bush I planted two years ago, and those berries are plumper and bigger than the wild berries.

Anyway, you cut off the berry clusters and strip off the berries in the kitchen.  You can see elderberries are TINY little purple berries.  And you can see how the clusters grow on the plant from the last one I’m stripping in this picture. 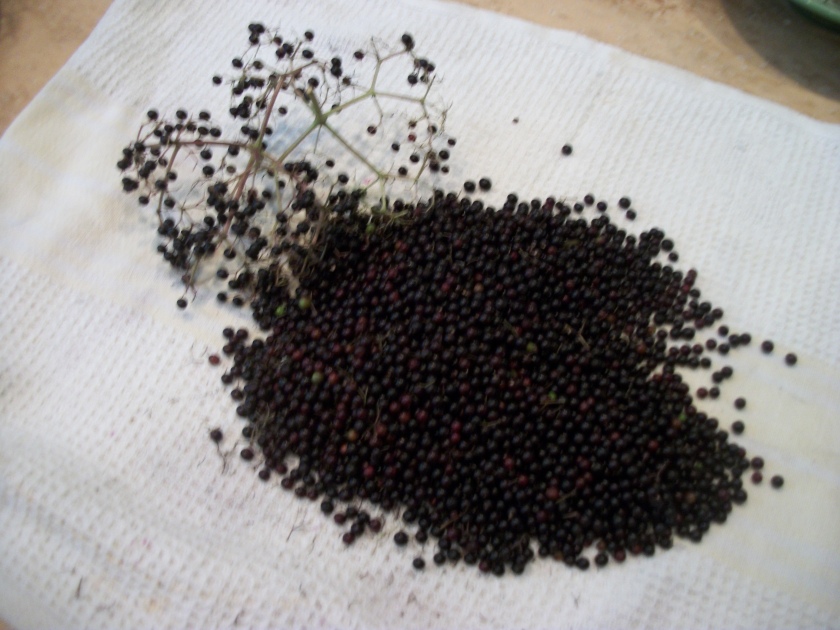 I make a tincture.  And, tinctures are alcohol based.  I use vodka.  Next time you are in Whole Paycheck or a health food store, see what a little bottle of elderberry tincture costs, and you’ll have newfound respect for my efforts.

I fill a quart jar with berries and pour the vodka over the berries to fill the jar.  I freeze the berries I have left.  Then I let the mixture sit out on the counter until the berries go white–as all their purple goodness is leached out.  At that point, I strain off the old berries and put in new ones and pour the now-purple vodka back into the jar.  Last year I did this process three times.  And can I tell you that that tincture was incredibly powerful. 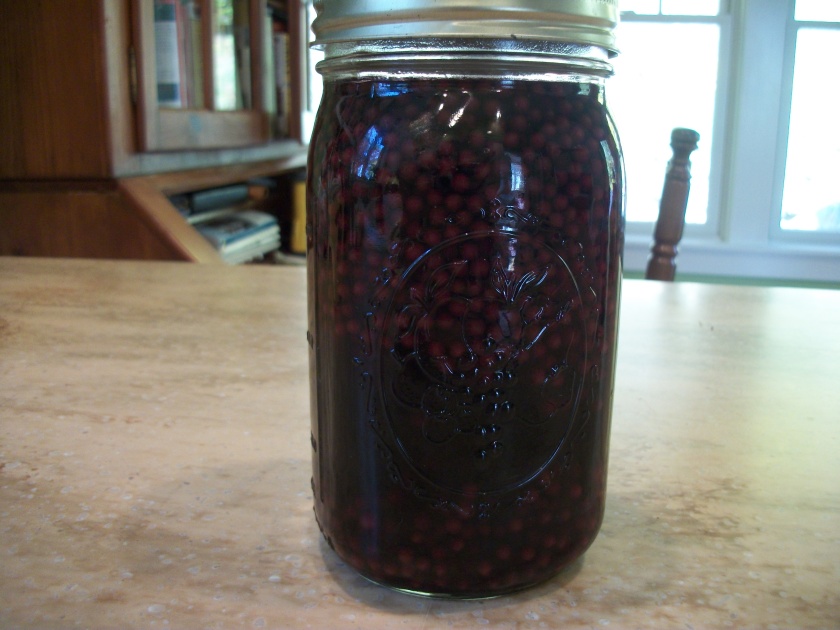 This year, I will probably do only two leachings since I don’t have that many berries.  Maybe I’ll leave the second batch of berries inside the liquid–they would provide fiber at least.

This tincture is dynamite for anyone coming down with a cold or the flu or anything that seems like it will become an illness.

Another use for frozen elderberries is to just thaw a few in a spoon overnight and eat them in the morning.  Dr. Natasha Campbell-McBride–of the GAPS protocol–which I’ve written about many times on this blog–recommends eating a few berries over the fall and winter to support your immune system.

Elderberry bushes are easy to locate and to forage, in the late summer.  FInd them in the spring when they have big white flat cluster blooms, flat like a Queen Anne’s Lace flower.  Google them for an image?  They like damp places.  If you don’t have access to the countryside, plant a bush in your yard somewhere.