SULFUR SPRINGS is Krueger’s 18th book in the award-winning Cork O’Connor series, which are mostly set up near the Boundary Waters and great northwoods area of Minnesota.  I say “mostly” because as some of the novels do, SULFUR SPRINGS moves the major characters to other locations.  SULFUR SPRINGS takes place in the Arizona desert south of Tuscon, where refugees from violence in their own countries try to cross the desert to reach the safety they seek in America.  In the process, these refugees fall prey to all kinds of “coyotes” who seek to use them in some way.  Krueger describes, too, the useless “wall” that seeks to block passage.  And as is true with all Krueger’s novels in this series, there are plenty of plot complications and mysteries to unravel.

I’ve read the series and am now awaiting the 19th book, due out later this month.  I especially like the native American spirituality that runs through all of the series, especially as O’Connor matures.  O’Connor’s grandmother was full blood Ojibwe, or Chipewa, or Anishinaabe.  And, Cork is now married to a full-blood Ojibwe woman, Rainy, who is also a healer.

Here are some quotes I especially enjoyed.  This book is published in 2017, so is written within “Trump World.”

I headed first thing to the hospital…to check on Jocko.  I felt responsible for the beating he’d taken, although I knew it was something he wouldn’t blame me for.  It was just one of the risks of doing the good work of the Desert Angels, which I understood.  The faces of Juan and the women and the children stayed with me.  Maybe they weren’t innocent in the eyes of the law, but there’s something more important than the law, and that is simply compassion.  That might sound strange coming from a man who’s spent a good deal of his life behind a badge, but laws are made by human beings and human beings are not infallible.  We make laws for all kinds of reasons, and not always the right ones.  One of the most powerful motivations for the enactment of lefislation is fear, and when you act out of fear, you risk becoming exactly the kind of monster you’re trying to bar the door against.  I couldn’t help thinking that we were putting those women and children—and the men, too, who came looking for nothing more sinister tha a job and a quiet life—through a monstrous ordeal.  And I understood why Peter and the other Desert Angels were willing to risk everything to help them (226).

A lesson from my earliest memories of my grandmother Dilsey, who was true-blood Iron Lake Ojibwe:  Land is not insentient; it is possessed of spirit.  Gazing down, I couldn’t help feeling that the fence and all it represented was a great violation of the spirit of the land.  The mind-set that gave rise to the fence was a great folly, the idea that a thin wall of steel and the imaginary line it demarcated could stand against the tide that swept across the desert, which was the tide of time and changing circumstance.  Politics were of a moment.  Sentiments shifted. nations rose and fell.  Steel rusted and crumbled.  But the desert and the flow of life across it would continue after that fence was nothing but scattered rubble among the cacti and the fear that built it was long forgotten (236).

I thought about the music I’d heard playing, the dancing in front of the taqueria, the brightness with which the homes, even the shabby trailers on cinder blocks, were decorated.  many of these people worked hard at jobs that no one else wanted and were poorly paid, I was sure.  But it seemed to me that there was something resilient in their spirit, some essential quality that kept the music and the dancing and the color alive.  I thought about the people of my own heritage, the Anishinaabeg, who’d been lied to and cheated and herded onto reservations, who fought against poeverty and all the ills that came with poverty.  But the Ojibwe I knew well, my family and those I counted as friends, had in their spirits the same resilience I saw reflected in
Gallina Town.  And I thought, as I had so many times before, that what’s important to a human being, any human being, isn’t the wealth that comes from money, but the richness that comes from community, a sense of connectedness to family and to friends and, as Rainy and Henry would probably have said, to the spirit of the Great Mystery that runs through all creation (260). 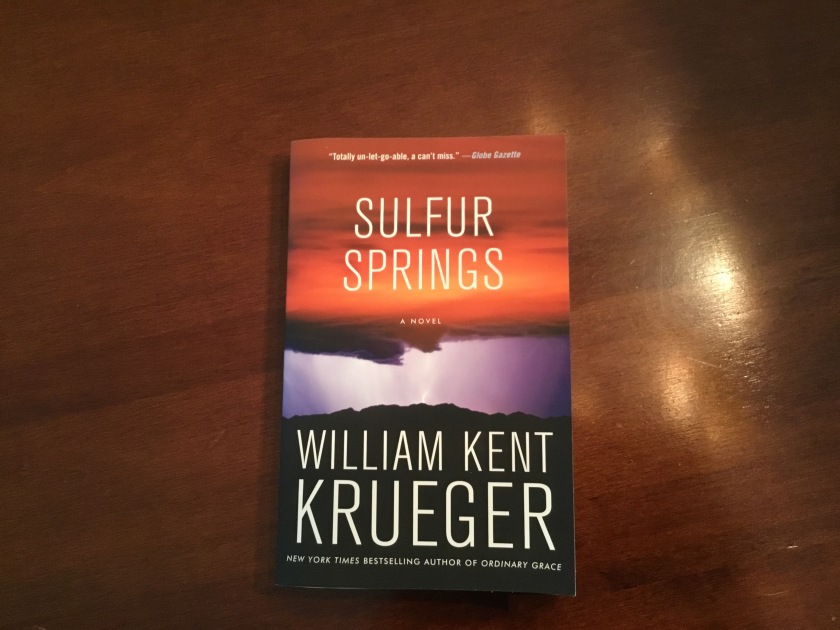 I am now reading one of Krueger’s stand alone novels, the award-winning ORDINARY GRACE.